Jebel Ali is a deep port located in Jebel Ali Dubai, United Arab Emirates. Jebel Ali is the world's largest man-made harbor and the biggest port in the Middle East. Port Jebel Ali was constructed in the late 1970s to supplement the facilities at Port Rashid

Jebel Ali port is one of DP World's flagship facilities and have been ranked as 9th in Top Container Port Worldwide having handled 7.62 million TEUs in 2005, which represents a 19% increase in throughput, over 2004. Jebel Ali Port was ranked 7th in the worlds largest ports in 2007.[4] Jebel Ali port is managed by state-owned Dubai Ports World.

Construction of Nhava Sheva port was originally planned in 1965. The original plan envisioned the port for use to import food grains, since India then faced a major food shortfall. Following the Green Revolution in India, India gained vast surplus food grain production capacity. So the plans for the port shifted focus to container traffic.

The Port of Hamburg is a port in Hamburg, Germany, on the river Elbe. The harbour is located 110 kilometres from the mouth of the Elbe into the North Sea.

It is named Germany's "Gateway to the World" and is the largest port in Germany. In terms of TEU throughout, the port of Hamburg is the third-busiest port in Europe (after the ports of Rotterdam and Antwerp) and 15th-largest worldwide. In 2010, 7.895 million containers were handled in Hamburg.

The harbour covers an area of 73.99 km² (64.80 km² usable), of which 43.31 km² (34.12 km²) are land areas. The location is naturally advantaged by a branching Elbe, creating an ideal place for a port complex with warehousing and transshipment facilities. The extensive free port also enables toll-free shipping. 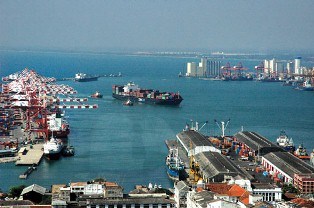 The Port of Colombo (known as Port of Kolomtota in the early 14th Century Kotte Kingdom) is the largest and busiest port in Sri Lanka as well as in South Asia. Located in Colombo, on the southwestern shores on the Kelani River, it serves as an important terminal in Asia due to its strategic location in the Indian Ocean. During the 1980s, the port underwent rapid modernization with the installation of Cranes, Gantries and other modern-day terminal requirements. Currently with a capacity of 4.1 million TEUs and a dredged depth of over 15 m (49 ft), the Colombo Harbour is one of the busiest ports in the world, and ranks among the top 35 ports. It is also one of the biggest artificial harbours in the world handling most of the country's foreign trade. It has an annual cargo tonnage of 30.9 million tons.

The Port of Houston is a port in Houston — the fourth-largest port in the United States. The Port is a 25-mile-long complex of diversified public and private facilities located a few hours' sailing time from the Gulf of Mexico. It is the busiest port in the United States in terms of foreign tonnage, second-busiest in the United States in terms of overall tonnage, and thirteenth-busiest in the world. Though originally the port's terminals were primarily within the Houston city limits, the port has expanded to such a degree that today it has facilities in multiple communities in the surrounding area. In particular the port's busiest terminal, the Barbours Cut Terminal, is located in Morgan's Point.

The Port of Houston is a cooperative entity consisting of both the port authority, which operates the major terminals along the Houston Ship Channel, and more than 150 private companies situated along Buffalo Bayou and Galveston Bay.

The Port of Genoa is a major Italian seaport on the Mediterranean Sea. With a trade volume of 51.6 million tonnes, it is the busiest port of Italy by cargo tonnage and the second busiest in terms of twenty-foot equivalent units after the transshipment port of Gioia Tauro, with a trade volume of 1.85 million TEUs handled in 2011.

The Port of Genoa covers an area of about 700 hectares of land and 500 hectares on water, stretching for over 22 kilometres along the coastline, with 47 km of maritime ways and 30 km of operative quays.

The Port of Odessa is the largest Ukrainian seaport and one of the largest ports in the Black Sea basin, with a total annual traffic capacity of 40 million tonnes (15 million tonnes dry bulk and 25 million tonnes liquid bulk). Along with ports of Illichivsk and Yuzhny it serves as a major freight and passenger gateway to Ukraine.

Izmir is situated at the east end of Izmir Bay. To reach the main facilities of the port of Izmir, a ship must enter Izmir Korfezi (inlet) from the Aegean Sea on a southeasterly course for about 20 nmi, then turn eastward through Izmir Bay for about 10 nmi.Izmir is Turkey's third largest port and has the best natural harbor. Traffic at the harbor is not congested; the ships transit the channel each day. Plenty ships can load/unload simultaneously, but Izmir is primarily a discharge port for tankers. The port is divided into several sections: outer harbor, middle harbor, inner harbor, and an explosives anchorage. The inner harbor has two primary port facilities: the old port which is sheltered by a breakwater and Alsancak. 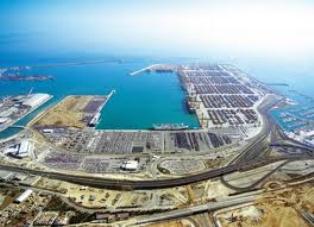 The Port of Valencia is the largest seaport in Spain and in the Mediterranean Sea basin, with an annual traffic capacity of around 57 million tonnes of cargo (2009) and 4,210,000 TEU (2010).

The port is also an important employer in the area, with more than 15,000 employees who provide services to more than 7,500 ships every year.